There are some unbelievable, thrilling sights to be seen in the caves around Margaret River. A day’s excursion into one of Margaret River’s caves is an exploration back in time. 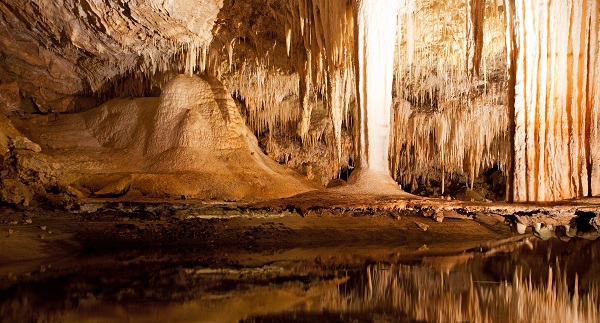 To assist in your cave exploration plans, we recommend the following 2 Margaret River caves that are very popular with both local residents and tourists. Note: Due to the many numbers of steps, inclines and declines within the caves, always wear sturdy, hiking shoes or boots when visiting the underground caves. The caves are not equipped to handle wheelchairs or other mobile devices, but anyone able to handle steps and walking paths with the assistance of a walking stick or cane will enjoy the adventure.

This ancient cave lays beneath the natural limestone ridge in Cape Naturaliste. Beyond its centuries old crystal arrays of stalactites and stalagmites, Ngilgi Cave has a long history steeped in Aborigine culture. The local legend associated with this cave is the age old battle between good, Ngilgi, and evil, Wolgine. Naturally, as with all good lessons in morality, Ngilgi won and peace was restored. There is an Aboriginal belief that the spirit of Ngilgi still lives in the cave and is now referred to as the Great Spirit of the Ocean.

The Ngilgi Cave is more than 500,000 years old, and it was rediscovered by Edward Dawson in 1899. It was, and still remains, one of the oldest and largest caves open to the public in Western Australia. Over the century since its opening, there have a number of animal fossils found that include those of a Tasmanian tiger and ancient kangaroos.

The cave is open every day, except Christmas, from 9AM to 5PM. There are several different cave tours that are semi-guided, and 4 tours led by professional cave guides. This means that you can explore the many tunnels, caverns, and chambers within the cave at your leisure. The first tour begins at 9:30AM, and the last entry to the cave is at 4PM, with new tours starting every half hour. There is an entrance fee, but children under the age 4 being free. Anyone under the age of 17 must be accompanied by an adult. You need to book a cave tour in advance, but you can pay the fee at the cave or through a local Visitor Centre.

You can make a full day’s trip to Ngilgi Cave with the adjoining playgrounds, barbecue tables, picnic grounds, restroom facilities, and surrounding walking trails. There is also a nearby café for takeaways and drinks.

Ngilgi Cave is located at 76 Yallingup Rd, Yallingup, WA. For additional information or questions, you can contact the cave’s administration staff at (08) 9780 5911.

The configuration inside this very large, very old limestone cave has remained unaltered by time or human alterations. You will see, feel, and experience what Western Australia history was like nearly 500,000 years ago. Over 10,000 fossils of prehistoric, giant animals, that have long been extinct, have been found in this cave since it was discovered by modern man in the 1850s. One spectacular fossil is the jawbone of a Zygomaturus that remains embedded in a wall inside the cave. A Zygomaturus was a very large wombat that roamed throughout Australia over 50,000 years ago. These species of Australian Megafauna, extinct marsupials, died off at about the time that the first aborigines came to the shores of Australia.

The main chamber of the cave is wheelchair accessible. The remaining chambers and pathways have lots of stairs, some being very steep and not accessible to individuals with walking problems. Visitors to the cave need to wear comfortable, walking or hiking shoes. The temperature inside the cave is on the cool to cold side, so take a jacket or sweater with you. During the warmer seasons, there is a section of the cave that is swampy, so take the precaution of using insect repellent before entering the cave. During the winter season, a shallow stream flows through the cave, and the water takes on a red color from the natural ores in the ground. The result is a beautiful reflection of colour onto the cave walls.

There is a bounty of stalactites and stalagmites are featured throughout the cave. In one of the small chambers, there is a prominent coloured shawl formation. Visitors enter the cave on the eastern side of Caves Road and exit on the western side. A brief, but breath taking bushwalk through the stately Karri and Marri trees brings visitors back to the carpark.

The cave is open every day, except Christmas, from 9AM to 5PM, with the last entry into the cave at 4PM. Later tour hours are available during major seasonal holidays. The cave tour is self-guided, and your tour includes a MP3 audio tour player, available in several languages. This means that you can explore the many chambers and pathways within the cave at your leisure. There is an entrance fee, but children under the age 4 being free. Anyone under the age of 17 must be accompanied by an adult. You need to book a cave tour in advance, but you can pay the fee at the cave or through a local Visitor Centre. The added facilities at the cave include ample parking in the carpark, hiking opportunities through the surrounding Karri and Marri trees, a kiosk with local information about nature and wildlife, and public restrooms.

Never before, nor ever again, will you get so close to true historical Australian life as when you are touring through this well preserved natural cave. For additional information or questions, you can contact Mammoth Cave personnel at (08) 9780 5911.

Take State Route 10 to Tunbridge St in Margaret River, take Tunbridge St to Wallcliffe Rd, then turn onto Caves Rd., and follow this road to Mammoth Cave. The distance is approximately 53.4 km and it will take about 41 minutes to get there.

Follow Yelverton Rd to State Route 10, follow State Route 10 to Wallcliffe Rd, then turn onto Caves Rd., and follow this road to Mammoth Cave. The distance is approximately 35.3 km and it will take about 30 minutes to get there.